If you’re familiar with Sprint’s iPhone Forever upgrade program, the ‘Galaxy Forever’ upgrade program is the same thing. Sign up with Sprint for a Galaxy or iPhone device of your choosing, and you’ll be able to upgrade to the next Galaxy phone after making 12 lease payments without paying upgrade fees. Sounds pretty straightforward.

It appears that Sprint is no longer offering the program anymore with either the Galaxy S7 edge or the Galaxy S7. Fierce Wireless has confirmed this with several Sprint stores already. 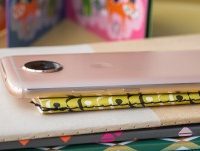