Samsung made the Galaxy A6 (2018) official at the beginning of last month. Since then, it’s gone on sale in Europe, and we’ve heard that the A6 would be headed to AT&T in the States eventually.

Now a new rumor comes to say that the smaller member of the A6 family will be launched by Sprint. The firmware for the Now Network’s version of the smartphone is reportedly already available, and that’s basically the source of the speculation.

What’s unclear is when Sprint will release the A6, or how much it will charge for one. Samsung still hasn’t said anything official about availability in… 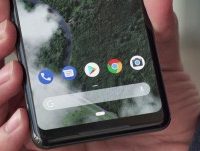